Emperor Dasharat of Ayodhya was coerced by his favorite wife Kaikeyi into granting two boons: banishing Rama, the rightful heir, to the forest for fourteen years; and proclaiming Bharat, her own son, as the king. The king incessantly lamented at the folly of trusting his wife; he cried inconsolably as Rama happily left for the forest, and eventually, unable to bear the separation from Rama gave up his life. Bharat furiously disowned his mother for her nasty act of banishing the faultless Rama. That’s when realization dawned that she had fallen prey to the evil designs of Manthara, her hunchbacked servant. Desperately, Bharat went to the forest to coax Rama to return, but failed. While Bharat resolved to live austerely in a hut, he insisted that Kaikeyi continue to live in the palace and realize how her greed for wealth and position had caused great pain to everyone in Ayodhya. Her futile life in the very kingdom that she gained through an evil plot, having “lost” her son, would torture her and that would be her purification.

Besides Rama’s relatives, there were others like Hanuman who performed heroic acts with deep humility and love for the Lord. Jatayu, a vulture, bravely laid down his life trying to protect Sita while she was being abducted by Ravana, the king of demons. The love for the Lord was the guiding force for each of these devotees, who joyfully and gratefully accepted inconveniences to serve Him. In contrast, Ravana and his associates display the psychology of modern humans – wanting everything for themselves, and using everyone and everything for their own interests. Ravana professed to love Sita but when she refused to yield to his advances, he threatened to kill and eat her for breakfast!  The Ramayana portrays good and evil in unambiguous terms and sharp contrasts.

What is it about Lord Rama’s pastimes that even millennia after they happened, they remain ever fresh and inspire people from all walks of life? Ramayana has always been the foundation of Indian ethos, and has attracted all because it exemplifies the highest degree of character, integrity and sacrifice: 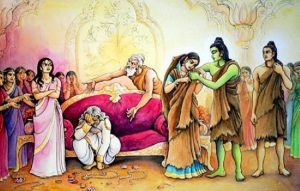 Coming to more recent times, a young Indian soldier laid down his life during the Kargil war. His fiancé was just 23 then. While he became a martyr for the Nation’s cause, she chose to remain unmarried and thus sacrificed her life for the cause of love. Both sacrifices touch the heart because personal pleasure is forsaken for a higher cause. Generally, people seek gratification, so those who chose to relinquish their desires inspire others to love, serve and be selfless. Compassion and sacrifice touch the heart and brings tears to the eyes.

Amazingly, today’s lovers emulate Ravana and inflict harm when their beloved refuse to reciprocate. Recently a boy grievously and permanently injured the beautiful face of a girl, by throwing acid because she didn’t love him the way he ‘loved’ her. Similarly, They even glorify Ravana’s forbearance in not forcing himself on Sita, while she was in his custody. Little do they know the facts! Once Ravana raped a heavenly damsel and her husband had cursed that if Ravana ever forced himself on any woman again, he would die. The Ramayana reveals that it was the fear of the curse coming true that prevented Ravana from enjoying Sita.

Today people eulogize evil and portray Ravana as a hero – someone superior to Rama. This reveals the dangerous mindset of humans.  Little wonder that in contrast to the young soldier who laid down his life, we have politicians who sell the country for vested interests, and lovers who cheat on their partners without shame or remorse. Therefore, it’s time now to reestablish Rama Rajya –  the kingdom of Rama consciousness, where everyone wants to serve, love, and live for others.