In the word Guru, “gu” means darkness or ignorance, “ru” stands for remover of that darkness. Purnima is the occasion or the day of full moon on the month of July or Ashadha month of the Hindu Calendar.[1] On this day, followers observe a festival that honors those teachers who have contributed greatly to one’s material and inner or spiritual knowledge.

There are many Sanskrit prayers honoring and seeking the knowledge of a Guru. The Guru Stuthi[2] sums up the knowledge seeker’s desire to learn and humbly seek the knowledge, material or spiritual, by the grace of the teacher:

“I was born in the darkest ignorance, and my spiritual master opened my eyes with the torch of knowledge. I offer my respectful obeisance unto him.”

“My salutations to that reverential teacher, who opened my eyes, by applying the divine collyrium of self-knowing in my eyes, which were blinded by the cataract of ignorance.”

“Guru is Brahma, the creator, Guru is Vishnu, the Preserver, Guru is Maheshwara, the renewer of all things, Guru is verily the Supreme Reality, To that Glorious Guru, My Salutations.

The source of these prayers or salutations to the Guru is rooted in the Sanatana Dharma or Hindu philosophical systems that pervade and stem from India. Religiously, a Guru Puja is performed to make offerings and pay one’s respects to the Guru. In many Hindu temples across India, the sanctum sanctorum of a deity is often shrouded in darkness, unlit. Through the ritual of lighting a diya, or an oil lamp made with a cotton wick dipped in ghee, the sanctum sanctorum is illuminated through several of the above and other various chants. Thus, symbolically and ritualistically, the concept of Guru is constantly remembered and celebrated: one who removes the darkness and thrusts us with knowledge into the light. 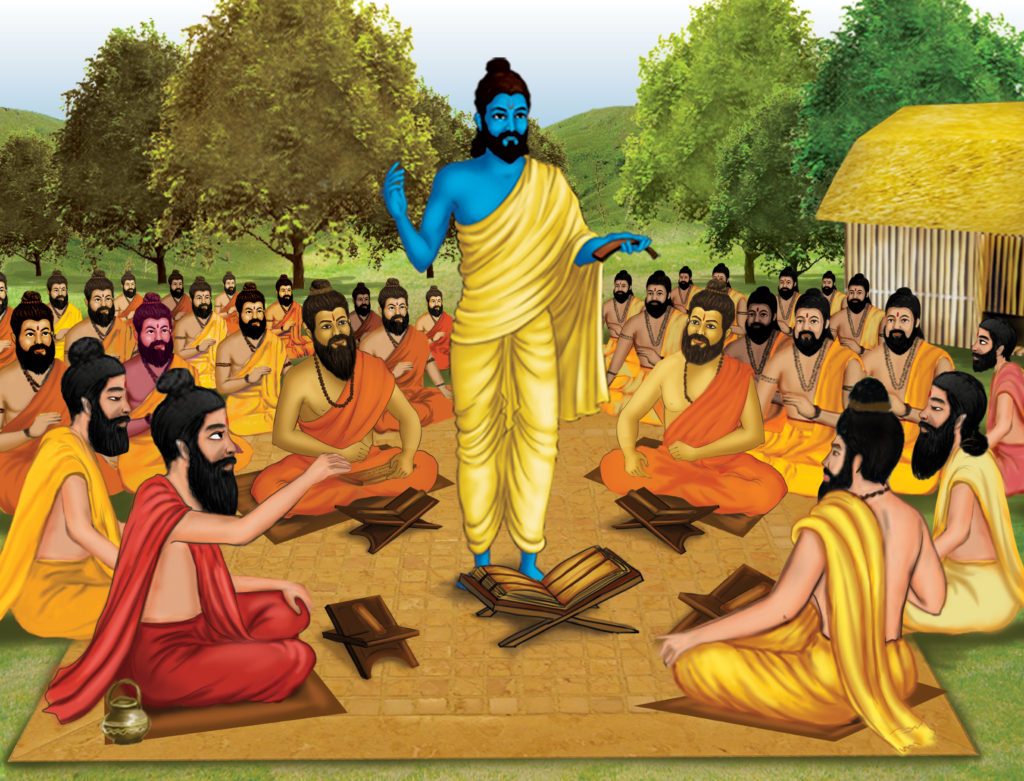 In the yogic tradition rooted in Hinduism,[3] it is said that the Adi Yogi, the first Yogi, appeared in the land now called India. Given his deep state of bliss, seven individuals, also known as Saptarishis, pleaded with the Adi Yogi to give them the same experience. The Adi Yogi, seeing their perseverance, decided to bestow upon them a yogic practice, which the seven men performed with intense will for eighty-four years. Amazed by their austerities and mastery, the Adi Yogi decided that on the full moon day, or purnima, to become their Guru. Thus, a Yoga teacher, not only the one that teaches you to twist and turn your body but also the one that truly gives you the knowledge to bridge the gap between the body and the mind (yo – ga: union), is considered to be a real Guru.

In the wisdom tradition or Jnana-kanda, portion of Hinduism, the Upanishads are a perfect example of the Guru and Shishya (disciple) relationship. Upanishads and the Aranyakas, were taught in the forest hermitages or academic institutions where it was more conducive for the student and the teacher to engage in discussions and debate about the nature of existence. In fact the word Upanishad reveals a great deal about the nature of such exchanges.[4] Upanishad is divided into three parts: upa – ni – shad. “Upa” means to “move closer or nearer,” in the philosophical sense, it would mean “to move nearer to the truth” and in the practical sense it would mean to “move nearer to the teacher.”[5] In this respect, it means to pay attention, without reservations, to what is being taught – dissolving the distance between the teacher and the student.[6] “Ni” means to “sit down or at a lower level,” not physically but mentally.[7]

The idea here is to allow the student to realize “that there are things to be learned and I do not have all the answers, so let me listen to someone who can teach me.”[8] This is about developing a sense of humility between one who seeks knowledge and the knowledge-bearer. With this humility to understand what one does not know, “shad” means to “settle down in the mind” – to be free and receptive to what is being taught.[9] These syllables not only apply to the student but to the teacher as well. Therefore, the Jnana-Kanda or the “wisdom-section” of the sacred scriptural texts within Hinduism are taught in the context of a Guru-Disciple engagement, debate, and discussion. Indeed, the wisdom and insight revealed by the Upanishads into the fundamental questions regarding the nature of life itself and its function in the natural world is a testament to the idea that knowledge flourishes where there is a practice of such complete humility between the teacher and student relationship.

For today’s world, Guru Purnima and the karmic performance of honoring a Guru is essential in many ways. Many have the attitude of “I know all,” one rooted in arrogance and ego. Many who have studied certain subject matter are convinced and have concluded that their framework in classifying knowledge is “it.” Such minds, which reject the opportunity to inquire and learn with humble skepticism, will struggle to fulfill the completeness or wholeness that they, and every living being on this planet, truly seek. Such completeness can only be accomplished with an attitude eyed towards the desire to learn and fulfill one’s thirst for material or ultimate knowledge.

Nurturing this attitude is an essential step towards finding a Guru capable of providing one with the necessary knowledge towards meeting their goal of becoming complete. One way to nurture such an attitude is to engage in the simultaneous act of humility and gratitude. With humility, one is able to carefully allow oneself to obtain knowledge from every one and every thing that pervades this universe. This watchful, humble attitude that “there maybe something I can learn here” will allow one with a quiet mind to identify points of inquiry and points worthy for a swift rejection. When one finds that point of inquiry, the simultaneous act of expressing gratitude will open up windows of knowledge in ways unimaginable. Such simultaneous practice of gratitude and humility will propel an individual to truly progress from ignorance to knowledge, and thus, darkness to light.

Whether it’s an insect or an adorable child, a friend or a companion, a mother, father, or a professor, a spiritual guide or a friendly neighbor, a colleague or a boss, a Guru comes in many forms. On this occasion of Guru Purnima, I hope we take the opportunity to thank others who have removed the darkness of ignorance and brought us into the knowledge filled with light. I hope that we take the opportunity to learn from others and what they have to say about their experiences and understanding of something. I hope that we take this time to introspect and open ourselves to the possibility, just like the Saptarishis who practiced the teachings of the Adi Yogi, to evolve consciously.[10]

May all of this reflection and action of inner transformation make us worthy instruments of peace in service of others.

[2] Rendition and translation by Sri M.

[3] Sadhguru Jaggi Vasudev, Classical Yoga: An Introduction to the Origin of Yoga.

Sai Kolluru is currently a rising third year law student at Emory University School of Law. He is the Chief of Staff and Assistant Managing Editor for Peer Review for the Journal of Law and Religion at Emory. He is also the President of the immigration law society at Emory. Sai holds a Bachelor's in Mechanical Engineering from Case Western Reserve University. His interests include studying various schools of thought in Sanatana Dharma and human rights issues of native populations and traditions around the world.