Any discussion on contemporary US economy will remain incomplete without reference to Alan Greenspan, who headed the US Fed for 19 years till 2006, and was revered as the ‘Money God’. In 2007, he wrote a book, The Age of Turbulence, in which he theorized that people in developing economies needed to save, but, not those in advanced economies, because they enjoy state-provided social security.

He wrote: “Despite their lower incomes, households and businesses in developing countries save a greater share of their income than do households and businesses in developed countries. Developed countries have vast financial networks that lend to consumers and businesses; most often backed collateral, enabling a significant fraction to spend beyond their current incomes. Far fewer such financial networks exist in developing nations to entice people to spend beyond their current incomes. Moreover, most developing nations are still so close to bare subsistence that households need to secure against future contingencies. They seek buffer against feared destitution, and since few of these countries have government safety nets adequate to protect against adversity, the only way for the households to do so is to set money aside. People are forced to save for a rainy day and retirement.”

It was Greenspan’s theory that directed the very course of the US economy, and of the globe, for two decades, till the 2008 crisis questioned it. See how the social security programmes celebrated by Greenspan as sparing the Americans from the need to save, and enticing them to spend instead, did the US economy in.

The ever-expanding US social security schemes, theoretically framed to protect families, practically ended up breaking them, besides bankrupting public finances of US. Even as far back as 1970, the perverted effect of social security and welfare schemes on families didn’t escape watchful eyes. The National Bureau of Economic Research (NBER) in the US brought out a book titled “The US Economy in transition”, in 1980.

It contained prophetic views of experts, including Milton Friedman, on US social security. Martin S. Feldstein, Professor of Economics at Harvard University, and President of NBER, wrote, in his introduction to the NBER work, that ‘welfare programmes introduced and expanded to help poor families might weaken the family structures’; that ‘in more subtle ways, government programmes that substitute the state for the family, cause behaviour that weakens the development of future population; fewer births, more unmarried individuals, more unmarried couples and more divorced parents; that medicare and medicaid introduced to help the elderly and poor might lead to an explosion in health care costs.’

Milton Friedman declared that ‘as children stopped contributing voluntarily to the support of their parents and began contributing through a system of government fiat, a serious erosion of family values became inevitable’ and saw ‘social security system as a detrimental influence on social patterns’. The NBER work also pointed out how ‘family functions such as production of food, clothing and fuel and some other staple items were taken over by business firms, and responsibilities such as education, childcare, and social insurance have been assumed by the state.’ What the NBER meant here is that business firms and the state had, together, robbed the families of their functions, leaving them functionless, therefore, dysfunctional.

Conceding that ‘the market system is the most efficient, and most conducive to individual freedom yet devised’, NBER pointed out that the market itself ‘doesn’t provide for the organisation of the society’ but its ‘success during the last 200 years is attributable in good part to the existence of strong non-market institutions such as the family; also adding that the ‘decline of the family and the growth of the government will jeopardise the market system and associated social, political and cultural freedoms.’

It concluded: ‘In the long run, a healthy economy requires a healthy society.’

Each one of these warnings came true sooner than later. Here is a look at US families before the expansion of social security in 1960s and after. US homes had an average of 4.5 persons in 1930; this came down to 3.5 per home in 1950, and now to 2.6. This alone cost 88 million additional houses, valued at $16 trillion at current prices! 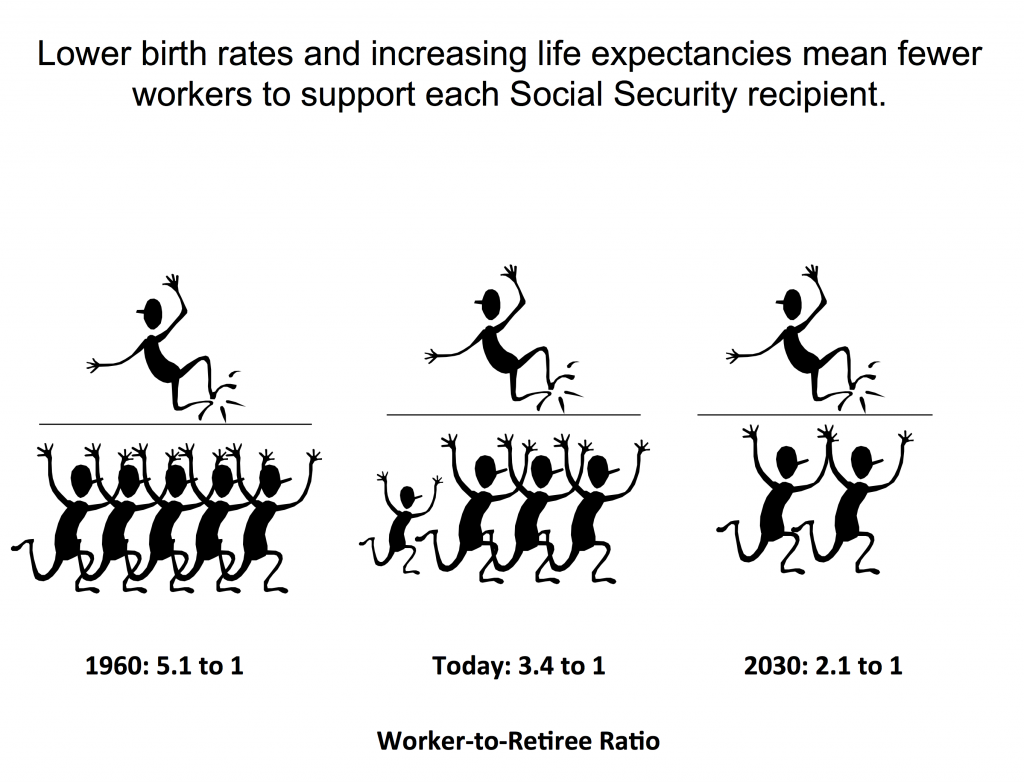 US families reel under debt. The home loans of households top $10 trillion. More than a third of these loans weren’t incurred to buy houses. According to studies by Greenspan himself, households borrowed $3.2 trillion against the security of appreciation in their home values (called ‘home equity cashed out’) during 2002 to 2007, and splurged it on consumption! Further, the 111 million US households use 1.2 billion credit cards, on which they owe $2.5 trillion. So, not just families, their finances too are broke, thanks to the financial networks of the US praised by Greenspan, having ‘enticed’ and made the US families profligate.

The state-provided social security that has replaced the families and made them state-dependent is stressed and potentially bankrupt. Richard W. Fisher, President and CEO of the Federal Reserve Bank of Dallas, has estimated the present value of future social security obligations at close to $100 trillion unrepresented by assets — meaning that the government will have no money to pay them when they fall due in future.

Tailpiece: Here is the Indian equivalent of Greenspan’s economics — the economics of Bahuka. Bahuka figures in the Bhagawata Purana, and was the advisor of Jarasandha, who was Kamsa’s father-in-law. Kamsa, who regarded Sri Krishna as his enemy, asked Bahuka’s advice on how to make his subjects state-dependent. Bahuka told him: “Open your treasury to the people. Make the people eat, drink and enjoy themselves. Bring up children to look upon parents as old and useless. That will make them laugh at those who talk of duty, love and compassion. Like well-fed cattle at the mercy of the cowherd, the people will be completely dependent on you.”

Rejecting the sage advice of the likes of Milton Friedman and Martin Feldstein, decades ago, the US opted to follow the economics of the likes of Greenspan. The result: Half of American families are state-dependent. But fortunately, Bahuka’s economics, close to Greenspan’s, was ignored by Indians thousands of years ago, though, of late, some Indian politicians seem influenced by Bahuka’s economics.

Swaminathan Gurumurthy, popularly known as a writer and journalist in India, is a corporate adviser, being a chartered accountant by profession. Highly rated for his investigative writing, he has ceaselessly campaigned against corruption at high places, exposing the bribery in Bofors arms deal and the nexus between corporates and government. Gurumurthy was rated among 50 most powerful persons in India in 1990 [Gentleman magazine]; as the 8th most powerful [Business Baron magazine 2004]; as the 17th most powerful [India Today magazine in 2005].