You are at:Home»Myths & Controversies»Krishna Janmasthami – Birth of a Lover or an Exterminator or a Statesman

In the last two decades, I have come across several historians, students, religious- spiritual practitioners and even common people who try to define Krishna’s personality in one way or the other. It is as if each one trying to impose their idea of God and creation on Krishna and His behavior. I thought of analyzing the same with scriptural references, historical facts and logic. What aspect actually represents Him the best? Would it be Mother Yashoda, who nourished Him as a baby, for which He is called Yashoda-dulal  or would it be the the childhood pastimes performed in Gokul along with the cows, monkeys and gopas (the cowherd boys) for which He is called, Gopal, Govind, etc? Would it be the gopis with whom He had intimate exchanges for which He is known as Gopinath and Gopijan-vallabh? Or would it be Arjuna who became the instrument for Krishna to present the philosophy of life?

Krishna as an intimate lover

In the Vedic literatures, there is no clear mention of the number of gopis that were in love with Krishna. It ranges from hundreds-thousands-millions to a billion. Primary of them are eight, called as the principal gopis with whom He exchanged incomparable degrees of love and affection.

Merely just by a sense of figures, it is impossible to imitate such a scale of relationships. And qualitatively it is almost impossible to exchange such emotions for even one person throughout our lives, which history has proved time and again.

Krishna as a social reformer

Krishna married 16,108 wives. However, none of these marriages were a peaceful, engagement-wedding-reception-celebration affair. They were all politically significant at that time. All of the marriages represent a political victory along with an ability to take personal responsibility. Of them, these 16,100 princesses rescued from the custody of demon Narakasur would have nowhere to go and with a social stigma on them they would only invite further exploitation. But by marrying them, He gave each one a respectful identity and a status in the society. Indeed, each one of them had a palace for themselves with personal reciprocation with Him! By giving personal shelter to discomforted princesses, He became a great social reformer. 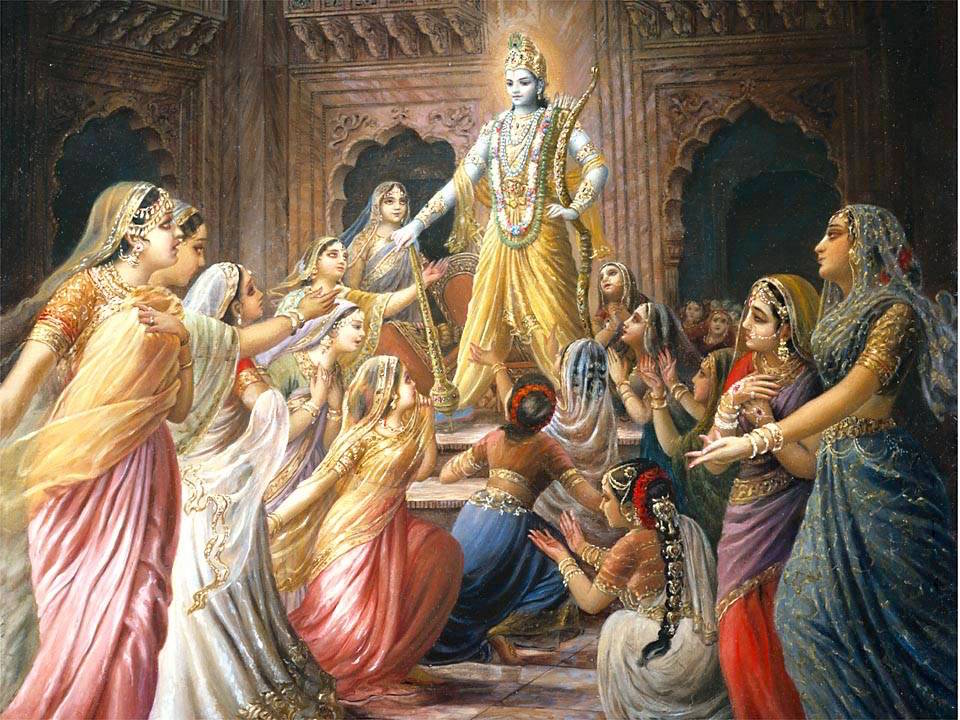 The best median estimates of deaths for various conflicts throughout the recorded history put the death toll at 487.7 million people. This is certainly not an accurate figure due to innumerable reasons, but it does give some idea to the scale of violence. These wars were conducted over many weeks, months and years and spread over 14 centuries. Compare this with the eighteen-day Mahabharat war conducted at the behest of Shri Krishna.

In the Mahabharat Book 11 (Stri Parva), Chapter 26, Verses 9 &10 the number of casualties in the war is given. “One billion 660 million and 20,000 men have fallen in this battle. Of the heroes that have survived, the number is 240,165.”  This eye-popping figure is approximately 4 times the earlier statistics that too in a mere eighteen days!

When the modern scholars try to see this aspect of violence only statistically, ignoring the whole context and rationale behind the war, it overwhelms the mind. Who would care if you loved a trillion but could eliminate a billion in just no time!

Krishna as the Statesman

Yet another popular argument is “Do not mix religion and politics”. Many times people try to separate God and spirituality from country and politics. This sentimental de-linking is akin to disconnecting Krishna from Kurukshetra altogether and only confining him to the groves of Vrindavan. The Kurukshetra war was not simply fought because it was affecting his loving exchanges in the forests of Vrindavan. It had broader principles of establishing righteousness (dharma samsthapana) for common people so that it would facilitate their overall Dharmic growth – pusushartha (Performance of obligatory duties) and paramartha (Pursuing the Absolute Truth).

The argument would sound better if the statement was, “Do not politicize religion”. It is not God or spirituality that is an obstruction to a Nation or vice-versa. Any Nation is built upon an ideology. An ideology of Dharma is what Krishna wants to establish, hence the war on territory. Ideology is like the food and Nation is the plate on which it is served. Nationality and spirituality with its associated religious practices cannot be separated. After all, all the scriptural wars or the teachings that have been spoken by various Avatars and Devatas, are connected to a territory- broadly referred in vedic literatures as desh-rashtra (country), prant-khand (territory), kshetra (place), nagari (town) and so on. 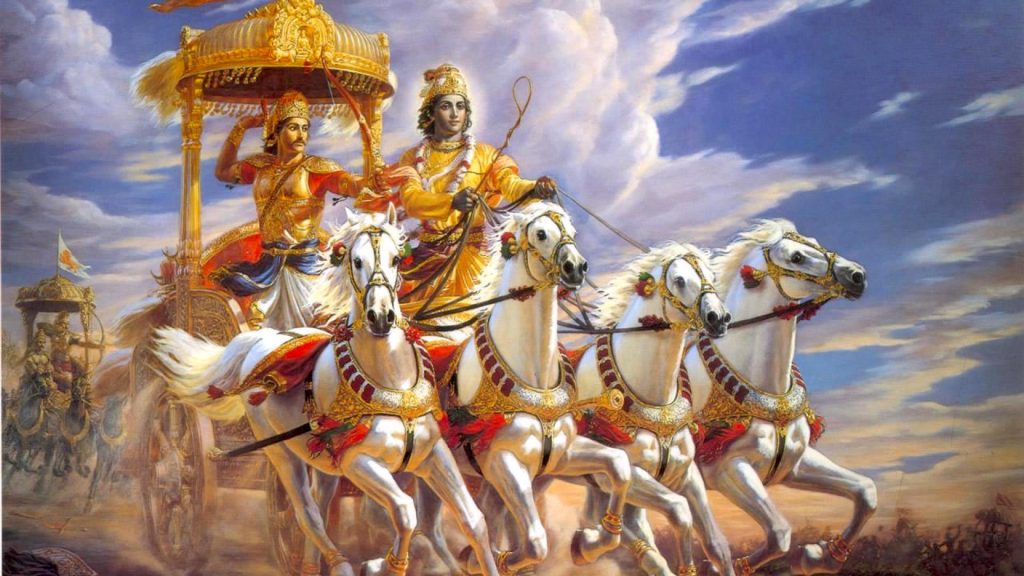 Nationalism in the context of Sanatan Dharma is not something limited to fixated boundaries. The protection and preservation of the places that inspire and facilitate one’s righteousness is an integral part of ones sadhana (spiritual practice) and duties. It was Arjuna who did not want to fight for a piece of land and it is Krishna who made him reclaim the territory, not for the sake of it, but for establishing Dharma even at the cost of one’s Guru or loved relatives.

As a finest Statesman, He taught Arjun to not only look at the gross deceptions of Dhritarashtra, Duryodhan, Karna and others, but also to the subtle deceptions caused by Bhishma and Drona. Bhishma and Drona represent ‘seniors worthy of worship’ (Bhagavad Gita 2.4) and authoritative figures. Yet they fail to give adhikaar (rights) to the deserving and empowerment to the able and un-willingly they display pseudo-philosophy. Arjuna was enslaved and weakened by the affection of grandfather Bhishma and the position of Guru Drona. However, Dharma cannot be obliged simply to the sentiments of love or to the sentiment of  ‘worshippable seniors’ who fail to discharge their obligatory duties (which is why He chastised Arjun). Certainly not when there is a serious disorder in righteous principles (which is why there was a WAR). Dharma would not glide down to such an extent but for the silence of Bhishma and Drona.

Krishna made every effort to avoid a war. After all He is not a warmonger. Yet, to prevent a war at the cost of Dharma is not acceptable. Establishing Dharma is not always a comfortable talk or about gaining academic qualification. It simply means to live up to the Truth, the Absolute Truth!

As one of the controversial but notable figures of modern times wrote, “Therefore I say it is really difficult to understand Krishna. It is very easy to understand a pacifist, because he has clearly chosen one side of the coin of truth. It is also easy to understand warmongers like Genghis, Tamburlaine, Hitler and Mussolini, because they believe in war as the only way of life. Pacifists like Gandhi and Russell believe that peace alone is the right way. Both doves and hawks are simplistic in their approach to life and living. Krishna is altogether different from both of them, and that is what makes him so difficult to understand.

Modern historians try to analyze Krishna, weighing different parts of His personality against the other. Some even try to debate the existence of Krishna despite the overwhelming archaeological evidence. Yet I would argue, it is not so important how and where Krishna did what, as compared to whether He is relevant or not today.

The principles laid down by Him are timeless – NOT confined to any particular time. In them one can see the fundamentals of reality and truth described one after the other.  Just like a scientific theory  has something known as constants (a constant is called so because it is very fundamental, very basic, and cannot be ignored at all), Krishna’s teachings are also a constant. He is not religious in his approach but purely logical, scientific and socially relevant. That makes Him, not only an element of the past but also of the present. He will remain therefore the future of civilization through His constant eternal principles.