You are at:Home»Culture»Ancient Indian Town Planning and Architectural Paradigms

According to the United Nations report launched in 2014, more than 54% of the world’s population in the current times lives in urban settings and the number is much higher for developed nations. Along with economic opportunities, the current city life has brought people together in uncomfortable ways leading to ghettos, poverty and crime. The discussions and debates on what could be a better, healthy, natural living have given rise to newer concepts such as smart cities, Eco-cities, Green cities and so on. Yet modern day city life is a far cry from what the architects of ancient India had in mind when crafting models for happy and peaceful coexistence.

In the context of Sanatana Dharma, a human life is considered to be a great benediction as it affords one the extraordinary opportunity to transcend the karmic baggage he’s been lugging. This means to re-design our lives in a way to suit the greater cosmic designs of the universe. To that effect, the broad corpus of Vedic knowledge and literature offer up limitless ways to create a conducive environment for personal physical and spiritual transformation.

Just like a properly built laboratory is the required foundation for any scientist to produce meaningful results through her experiments, every human needs a similar setup to encourage meaningful spiritual results. One of these critical dimensions is how we physically live in the world, namely towns and cities.

The traditional Indian knowledge on the topics of Nagara Vinyaas or Vastu, or town planning and architecture, often produces a whole spectrum of reactions from the people, from curiosity to apprehension, from holistic to malified practices. But if duly analyzed from a technical perspective, it can surely result in the shift of people’s perception about the concerned topics from a must-be-followed-sacred-tradition to professional town planning/architecture practices. Hence the proper initiation of a full and in-depth understanding of the concerned knowledge domain will definitely rectify the apprehensions raised about these topics caused by various intentional or unintentional misunderstandings. 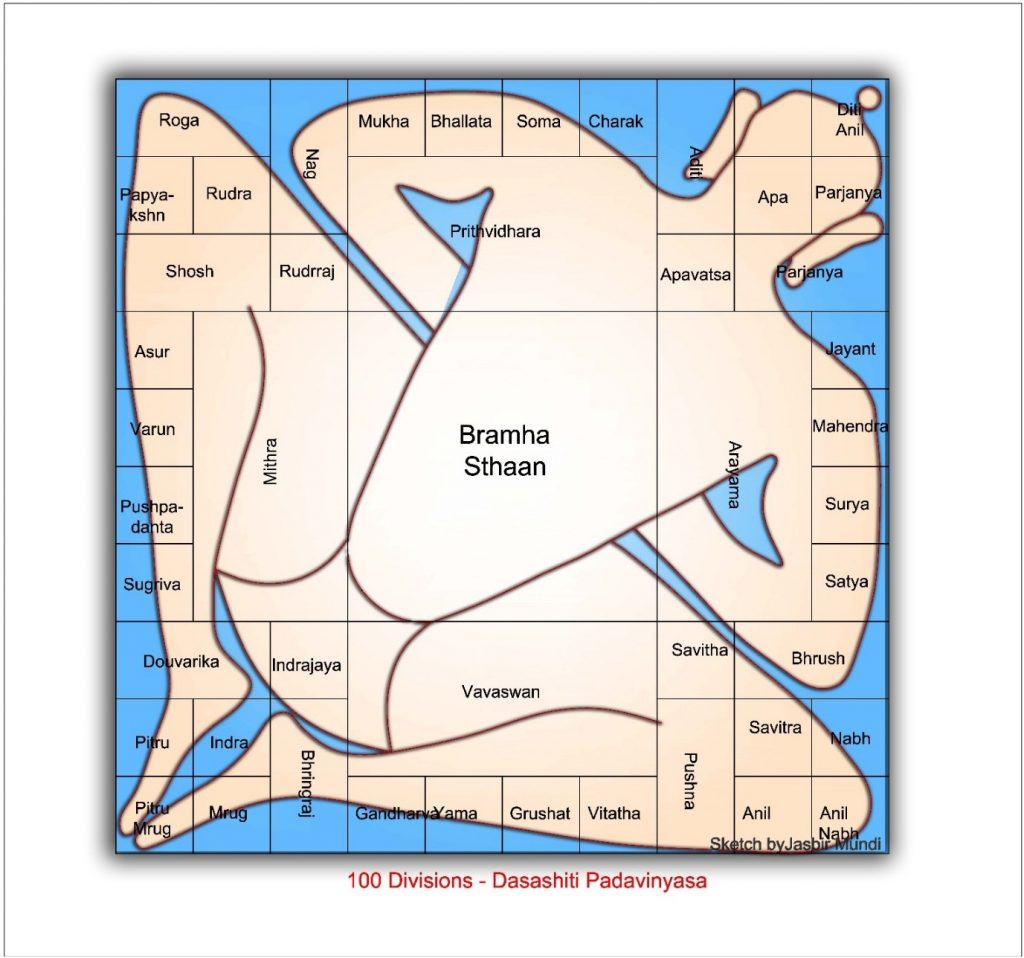 The existing approaches being employed for understanding this ancient Indian knowledge and practices about the subjects of town planning and architecture can be considered as analogous to that story of few blind men and the elephant. This knowledge system and practice is profound and variegated like that elephant in the story, in the sense that it has many aspects or different fields within itself.

Traditional Vastu treatise like Mayamata, Manasara, Shilp Ratna and Samarangana-Sutradhara etc., contain verses on all these aspects: the planning of towns, villages, the design of temples, halls, pavilions, and seats etc. It also has information on material specifications, brickwork, joinery and carpentry. And while the majority of the text concerns the planning, architecture, and construction practices, the remaining verses are on astrology, ayadi formulae, mandala diagrams, muhurta and other non-architectural aspects. Thus, they can be considered as equivalent to the present day’s town and architectural planning/design guidelines or practices, as they broadly talk about various principles of design, aesthetics, management and total quality management, which are a crucial part of the usual processes in the contemporary construction and real estate industries.

A variety of sacred and ancient texts of India make references and elaborations on Vedic city planning, design, and architecture.

The study of this history of Indian architecture and town planning, in the spirit and approach of a modern ‘scientific’ method, was primarily initiated during the second half of the eighteenth century. The main motive behind the exploration of these knowledge domains was to understand the Indian culture for facilitating better control and governance by the Britishers.  Many of the Western scholars working in this field of ancient Indian town planning and architecture genuinely felt that it was also worthy enough for an in-depth study and that all those historical monuments which stand as a testimony to these texts should be intrinsically preserved and analyzed.

But despite this acknowledgement and appreciation of the architecture and town planning of the ‘East’, some scholars of India still not free from the Colonial mindset and hangover, ignored the subject while in contrast, many scholars in the same period from other European countries like France and Germany showed keen interest in this aspect of the Indology; and hence, quite interestingly, one may find the mentions and details of the same in the Western literature as well.

The Indian knowledge system about town planning and architecture is considered to have its roots way back from around 2500 B.C. And we can very well find that the building or settlement patterns, town forms, architectural styles, typologies etc. were extremely rich and diverse ever since that era. The proud testimony to this excellence in the architecture and town planning practices of our nation is evident mainly through two phenomena. The first one is the built examples of architectural and planning marvels located across the country, the traces of which are visible even today. These beautiful and magnificent structures aren’t confined to a single time epoch or a dynasty/civilization/culture, but rather range across numerous time eras, right from 2500 B.C. till today. And the second phenomenon is the finding of diverse literature dealing with this subject in the form of treatises in Sanskrit, and in several other regional languages as well across different geographic locations and ages in India. These are primarily known as the Vastushastra or Shilpa Shastras, i.e., the science of architecture or construction.

Many of the manuscripts of these treatises have been translated, and can collectively be considered under the ‘Planning and Architectural Literary Heritage’. The literature, chiefly in Sanskrit, under this category, aren’t particular to a single location but are spread across India. Few commonly known examples are Vishvakarma Vastushastra, Aparajita Praccha, Manasara, Rajavallabha, Mayamatam, Kasyapa Shilpa, Silparatna, and Samarangana Sutradhara.

The availability of this diversity in the concerned literature can further be categorized into two broad subdivisions for the purpose of analysis: Proper Architectural Works and Allied-Architectural Adjuncts. The latter contains all the allied and associated pieces of information on these subjects, as expounded in various Puranas, Agamas, etc.

Unfortunately, in the present context, this traditional knowledge system concerning town planning and architecture, has become a double-meaning word. For example, one of the popular but morphed interpretations of the word ‘Vastu’, which is used by many to monetize the commoners’ ignorance about the subject, can mean something mystical or superstitious or ritualistic that can make or break the life of the client. However, the other simple yet scientific meaning can imply ‘Vastu’ as the Sanskrit equivalent of architecture or the Indian system of architecture. In fact, etymologically the word ‘Vastu’ is derived from वस्तु (matter/earth); and Vastu hence can be considered as the simple act of modifying this Vastu (matter) into usable forms (which can be house, temple, towns, villages, sculptures or iconographies).

Hence its always advisable that whenever one uses words like ‘Vastu’, the first step should be to find out what that person really means or implies by the word or the context in which it is being used: it could either mean what all has been mentioned here previously or perhaps even more. Even in several different contexts, it could either happen that a person might use it to mean it reverentially (like the name of a deity), sarcastically (like the honesty of lawyers), fashionably (Vastu? The new ‘feng-shui’?); or perhaps academically (like a branch of knowledge) or scholarly, like what is intended here in this article.

Another significant but misunderstood consideration with regard to this Indian knowledge system which occupies less content in texts but is much more hyped in the society is the dos and don’ts part: locations of activities, entrance, and directions, astrology, muhurtas, mystic formulae and calculations. Presently, we do not possess much scientific and research base of this aspect to either support it or denounce it, and hence the most logical conclusion that should be made is that the logical validation of this ancient Indian knowledge is the need of the hour. This is rather much better and fruitful approach than just branding or promoting something as good or bad without going into its details and intricacies.

Denouncing something because it is old could be a great loss. It could perhaps be much more valuable if researched and interpreted correctly and is subsequently modified for its use in the present age.  In addition to the basic philosophy used therein, the brief content description specific to planning, architecture, and sculpture in all these texts will be explored further in subsequent articles on the topic.