The narration is in response to a crestfallen King Dhritarashtra’s ‘mistimed’ lament that sufficient efforts had not gone into avoiding the war. Mistimed because, he should have raised this concern ‘before’ the war, not after he started sensing his defeat! Contrasting to this, Arjun as an extremely concerned kshatriya warrior questions the very need to proceed with the war, even moments before the fight, that too after the war conchshells were blown. Arjuna expressed his observations in the form of a dilemma rooted in dharmic pulls between his kula-dharma (responsibilities associated with his own family as well as the families of soldiers assembled to fight) on the one hand and his kshatriya-dharma (warrior duty) on the other hand. Following the latter seemed to involve destroying the former and with it the whole social fabric (Gita 1.28-46). 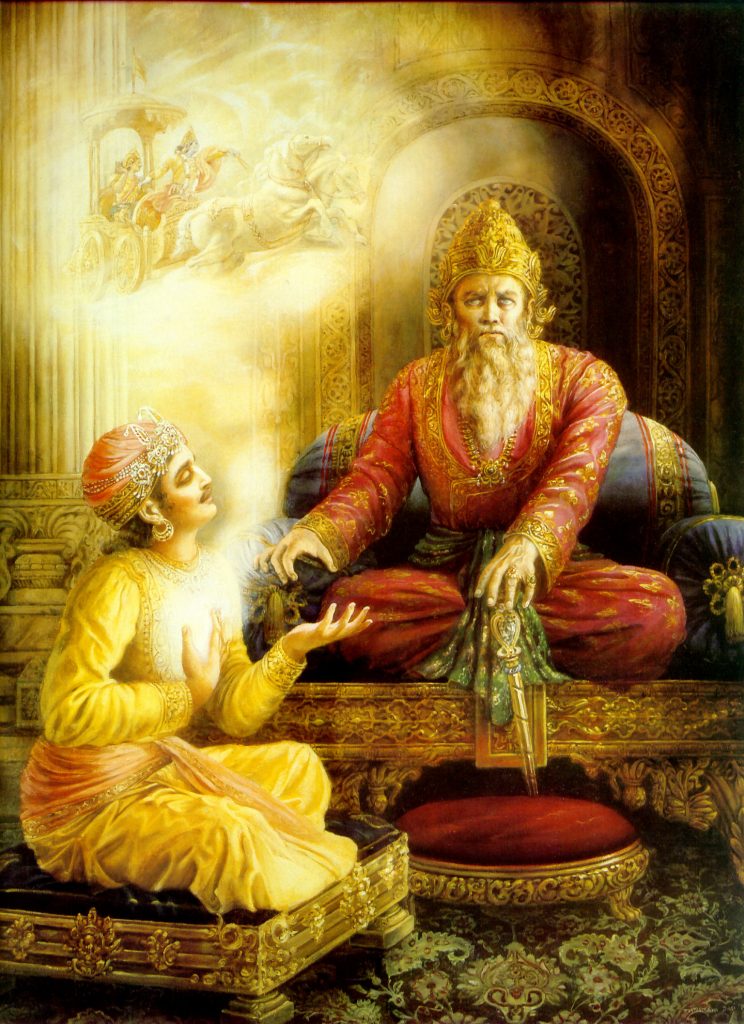 Desiring to abstain from any such irresponsible behaviour, Arjuna expresses his decision of not fighting. One can imagine Arjuna hinting to the herculean efforts Krishna had put to protect his Yadu kula (clan) from invaders such as Jarasandha and Kalyavana by reclaiming land from the sea to create the forted city Dwarka. Why shouldn’t Arjuna take inspiration from such commendable acts of Krishna, his close friend, philosopher and guide to avoid the impending ghastly war altogether? After all, he and his brothers had spent a significant portion of their lives in the forests and could easily go back to a very simple life in the forest (including the possibility of life as beggars), leaving Hastinapura to Duryodhana and his brothers.

In his very first opening word in the Gita, ‘dharma-kṣetre’, Dhritarashtra apprehends the context of dharma that Krishna would provide in subsequent chapters, to help Arjuna assess and address his apparent dilemma.  In fact, while empathizing with Arjuna’s concerns that were rooted in a sense of responsibility, Krishna minces no words in condemning Arjuna’s decision to not fight and instead retreat from the war. The dharma point of view is that decisions are not destinations, but rather that they be viewed as significant milestones in life’s journey! Such temptation to abdicate is a weakness – the result of a blurred focus, guised as compassion for the evil-doer (ātatāyi in Gita 1.36).

This temptation is itself a result of a weak succumbing of the Good to Evil at crucial moments requiring wise action, guided with knowledge and inspired by devotion.  The good, though fewer in numbers are well-kept together by their sense of responsibility and duty, while in complete acknowledgement of the Divine Himself. The Pandavas were grounded in a sense of responsibility, patiently withstood insults and hardships (instrumented by Duryodhana and his associates) for several years and did everything possible to avert the war. The post-war observations of Pitamaha Bhishma in the Mahabharatha, Santi Parva as well as in the Srimad Bhagavatam Canto 1, chapter 9 very well complement the pre-war observations of Arjuna and Krishna’s enlightening words in the Gita. Bhishma, lying on a bed of arrows, and while preparing to leave his body, summarizes the testing times that the Pandavas had to continuously undergo:

Oh, my dear son Yudhishthir, what terrible sufferings and injustices you good souls have suffered, even though you are dharma putra personified. Only because you were protected by the Brahmins, dharma and the Supreme Lord himself did you manage to survive. The many miseries endured by your mother and my daughter-in-law Kunti are especially lamentable. Upon the great King Pandu’s death, she became a widow with many children, thus suffering. Later, she suffered more due to your sufferings. In my opinion, this is all due to inevitable time, under whose control everyone in every planet is carried, just as the clouds are carried by the wind. 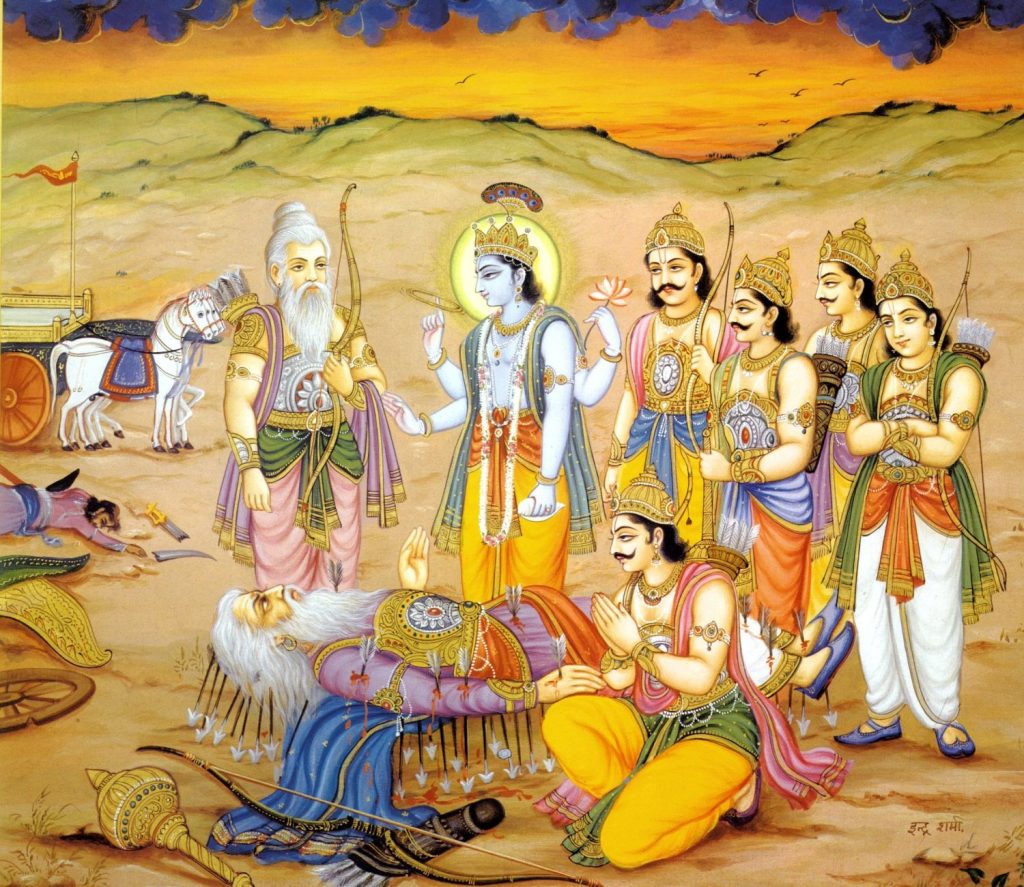 As the Pandavas and several great sages assembled there listened respectfully, Bhishma continued:

O Yudhishthir, best among the Bharatas, I therefore maintain that all this destruction is within the Supreme Lord’s plan. Accepting His inconceivable will, you must follow it. You are now the appointed administrative head and thus you should take care of those subjects who have been rendered helpless.

Thus, as pointed out by Bhishma Pitamaha, like seeds, the Good must persist during times of scarce water and dry clouds and be determined to germinate and grow when blessed with rain-bearing clouds!

What characterizes the Evil is that it is ill-assorted, directionless, motiveless, and is not destined to be firmly united. Take the example of Duryodhana, whose anxiety-ridden moves are described in verses 1-11. While he diplomatically tries to make everyone feel wanted and respected, one cannot escape noticing inconsistencies in his behavior. bhīṣmam evābhirakṣantu, bhavantaḥ sarva eva hi (Gita 1.11): Duryodhana wanted everyone to provide their complete support to Bhishma! If this was the level of his faith in Bhishma (who had already vowed not to kill any of the 5 Pandavas, in contrast with Bhimasen who had vowed to kill all the 100 Kauravas), why had he not paid heed to a single advice that Bhishma had provided until then? The effect of the sounds of conchshells (announcing the commencement of the war) on Duryodhana and his aides is also graphically described: sa ghoṣo dhārtarāṣṭrāṇāṁ, hṛdayāni vyadārayat…(Gita 1.19). The blowing of Pandavas’ conch shells shattered the hearts of the Kurus. On the other hand, when they Kurus blew their conch, the experience was chaotic, exposing their internal conflicts. They all stood there only as individuals, lacking belief in any collective cause. Theirs was the story of Evil, which strived to win and retain ascendency by deceit and falsehood, by pressuring the gullible, by blackmail, by flattery, by trickery and inflated bravery and bragging.

The existence of a healthy society is contingent upon the facilitation and experience of interdependence. Trouble upon one’s neighbor today only means that trouble is around the corner for oneself. Being aware of connections allows us to be cooperative. Arjuna knew his responsibility as a member of the society and was, therefore, concerned about the danger that was immediately impending upon the relatives and descendants of those assembled on the battlefield. What he missed, however, was the much larger and longer picture that Krishna eventually helped him appreciate.

Ignorance of our interdependence and meticulously cultivated selfishness makes us eventually insecure and anxious, as we observe with Duryodhana. In this context, it might be relevant to recall a story that originates in strained relationships in a society of frogs. The leader frog wanted to get rid of inconvenience by making friendship with a snake. Grabbing this opportunity, a hungry snake kept devouring the frogs, one at a time. Each frog observed its neighbor being devoured but convinced itself of its safety: “I can’t be next, it must be one of the others,” to only find itself in the mouth of the snake the very next moment. Eventually, every frog met with this same fate.

Prof. Ramakrishnan did his BTech and Ph.D from IIT Mumbai. He is an associate Professor and J.R. Issac Assistant Chair Professor in the Institute. He was awarded the IBM Faculty Award in 2011. Besides his contributions in the Department of Computer Science and Engineering, Ganesh works closely with the Centre for Technology Alternatives for Rural Areas.