You are at:Home»Culture»The Vedic Metaphor of Indra’s Net

Indra’s Net is a metaphor for the profound cosmology and outlook that permeates Hinduism. Indra’s Net symbolizes the universe as a web of connections and interdependencies among all its members, wherein every member is both a manifestation of the whole and inseparable from the whole. This concept is the foundation for Vedic cosmology and it later went on to become the central principle of Buddhism, and from there spread into mainstream Western discourse across several disciplines.

The metaphor of Indra’s Net originates from the Atharva Veda (one of the four Vedas), which likens the world to a net woven by the great deity Shakra or Indra. The net is said to be infinite, and to spread in all directions with no beginning or end. At each node of the net is a jewel, so arranged that every jewel reflects all the other jewels. No jewel exists by itself independently of the rest. Everything is related to everything else; nothing is isolated.

Indeed, the fundamental idea of unity-in-diversity underpins all dharmic traditions; even though there are many perspectives from which Indra’s Net may be viewed and appreciated, it is ultimately recognized as one indivisible and infinite unity. From the Hindu viewpoint, the One that manifests as many is named Brahman; even seemingly disparate elements are in fact nothing other than reflections of Brahman, and hence of one another. This notion of an organic unity is a signature of Hinduism, and distinguishes it from all major Western religions, philosophies and cultures. 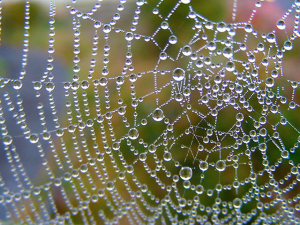 Each jewel of Indra’s Net includes the reflections of all the other jewels; the significance of this symbolism is that each entity in the universe contains within itself the entire universe. This idea, rather than positing interdependence among separately existing entities, asserts that the whole does not owe its existence to the coming together of individual parts that have independent existence. Indeed, the existence of each individual part is contingent upon, and relative to, the existence of the whole and of all the other parts. Yet, paradoxically, each individual part also ‘contains’ the whole within itself. Put simply, the whole and the parts are inseparable.

Every jewel in Indra’s Net is a microcosm of the whole net; every component is the cause of the whole and also the effect of the whole. Nothing exists outside the net. In the Hindu worldview, the only essence that ultimately exists is Brahman; Brahman is the foundation for Indra’s Net, and no jewel exists apart from Brahman.

The jewels of Indra’s Net are not meant to symbolize static substances. Each jewel is merely a reflection of other jewels, and individual jewels always remain in flux. Each jewel exists only momentarily, to be continuously replaced by its successor, in mutual causation with other jewels. Just as the interdependent cells of the human body are perpetually changing, so also everything in Indra’s Net is perpetually in flux. Reality is always in the flux of becoming. 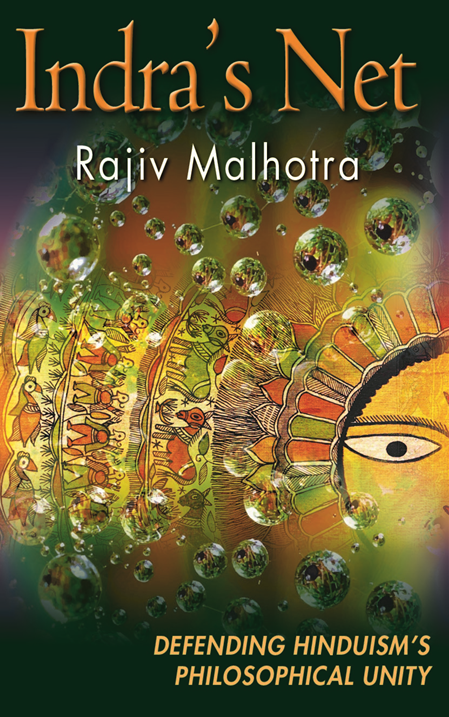 This concept is different from the notion of real, independently existing entities undergoing modification, or static entities that happen to be woven together.

Swami Vivekananda applied the great Upanishadic saying, ‘tat tvam asi’ (‘that thou art’) as the basis for Hindu ethics. He said, in essence, that we are all jewels in Indra’s Net (even though he did not use this metaphor to say it). Thus, Vivekananda defined a Hindu platform for determining ethical conduct, not only towards all humans but towards animals and all entities in general—because everyone and everything is a jewel in Indra’s Net.

The Sanskrit word bandhu is frequently used to describe the interrelationship between the jewels of Indra’s Net. ‘Bandhu’ defines a corresponding entity; for example, a relationship between x and y can be stated as ‘x is a bandhu of y’. In traditional Indian discourse, this term is often used to explain the unity between the whole and its seemingly diverse parts. For example, ancient thinkers have described specific bandhus, which express the paradoxical relationship of the microcosm to the macrocosm. While the microcosm is generally perceived as a map of the macrocosm, it is also the case that both microcosm and macrocosm continuously mirror one another.

Bandhu can also refer to the connections among various facets of our overall unified reality, linking sounds, numbers, colors and ideas together. No object—whether physical, mental, emotional, or conceptual—has any existence by itself and is merely another facet of this unified whole. In addition, bandhu describes how the transcendental worlds correspond with the perceptible world, implying that whatever we perceive through our senses is but a pointer to something beyond.

Kapila Vatsyayan, a scholar of classical Indian art, has cited many examples of bandhu in the form of common metaphors. Significant symbols may be found in the Rig Veda, the Natya-shastra (a seminal text on aesthetics and performing arts) and the Tantrasamuccaya (a text on temple architecture). The seed (bija) is often used to symbolize the beginnings. The tree (vriksha) rises from the bija and represents the vertical pole uniting the realms. The nabhi (navel) or the garbha (womb) brings together the concepts of the un-manifest (avyakta) and the manifest (vyakta). The bindu (point or dot) is the reference point or metaphorical centre around which are drawn geometrical shapes, which in turn facilitate the comprehension of notions of time and space. The sunya (void) is a symbol of fullness and emptiness. From its arupa nature (formless) arises the rupa nature (form) and the parirupa (beyond form). There is equivalence in the relationship between sunya (emptiness) and purna (completeness or wholeness), the paradox being that the void has within it the whole. 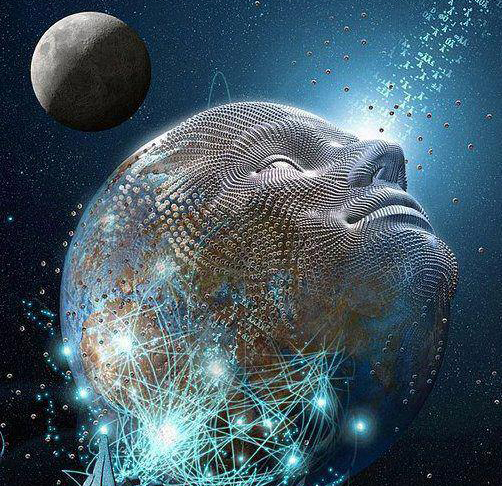 In Hinduism, the concept of unity-in-diversity can also be understood as a manifestation of Brahman, an agency that penetrates, pervades and harmonizes the entire universe. Brahman enters and shapes the mould of every entity giving it form, substance and individuality. It is only human pre-conditioning that causes us to visualize the multiplicity of forms as separate entities, and hence the world appears to be full of contradictions. The Brhadaranyaka Upanishad says:

Brahman is responsible for the interconnectedness of things and has become the living and the non-living; the visible and the invisible; the creatures which are two-footed and those that are four-footed. He became the subtle body and then the gross body by means of a subtle instrument known as the subtle body. This very Being became the vital consciousness of all. This is known as the Madhu­Vidya, the sense of the ‘honey’ of all beings, the knowledge of the inter-dependence of things and the vital connection of everything, under every condition, at every time, everywhere.

Hinduism devotes much thought to exploring the relationships between the jewels of Indra’s Net, and how they are manifestations and reflections of each other. Hindu thought is distinct from Abrahamic religions, which are premised on the existence of one separate God, one absolute event in history, and one inviolable set of injunctions. Hindus, for better or for worse, tend to be natural de-centralists. This is why it is hard to understand Hinduism, and difficult to organize and mobilize Hindus under an overarching corporate institution. It is also why Hinduism has proved, thus far, difficult to destroy. This idea can be referred as ‘integral unity’. The integral unity of the whole manifests itself in the parts, and they in turn aspire to unite with the whole; this principle is reflected in every domain of dharmic knowledge, including philosophy, science, religion, ethics, spirituality, art, music, dance, education, literature, oral narratives, politics, marriage rituals, economics, and social structures. Each domain of dharmic knowledge is itself a jewel in Indra’s Net, and reflects all the others. In other words, the same underlying principles are represented in these specialties in different ways. 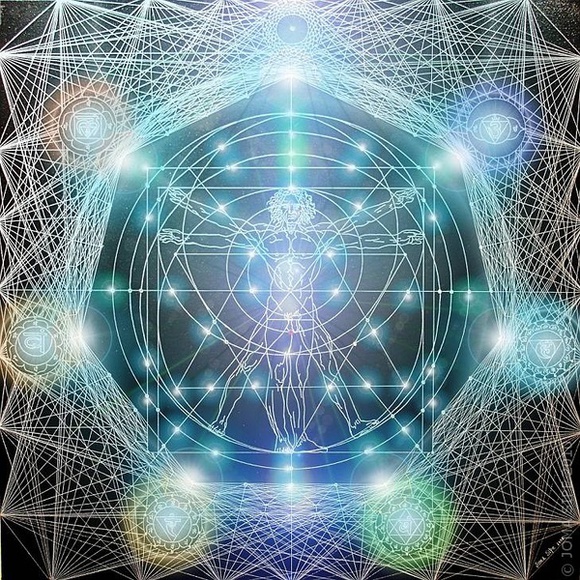 For example, Hindu dance is not merely an isolated form of cultural expression but a complete and rigorous discipline through which one may learn and experience philosophy. This quality of correspondences across many domains of knowledge is striking. Music and sacred dance have a formal grammar based on Hindu cosmology. The Sanskrit Natya­shastra, a seminal text on performing arts and aesthetics, treats natya as a total art form; its scope includes: representation, poetry, dance, music, make-up, indeed every aspect of life. The Natya-shastra presents an integral view encompassing the Vedic rituals, Shaivite dance and music, and the epics. The eight traditional rasas it describes (love, humour, heroism, wonder, anger, sorrow, disgust, and fear) mirror a complete experience of the real world like the jewels of Indra’s Net, and together facilitate a practitioner’s pursuit of the purusharthas (human goals).

Some other examples across various domains are as follows: 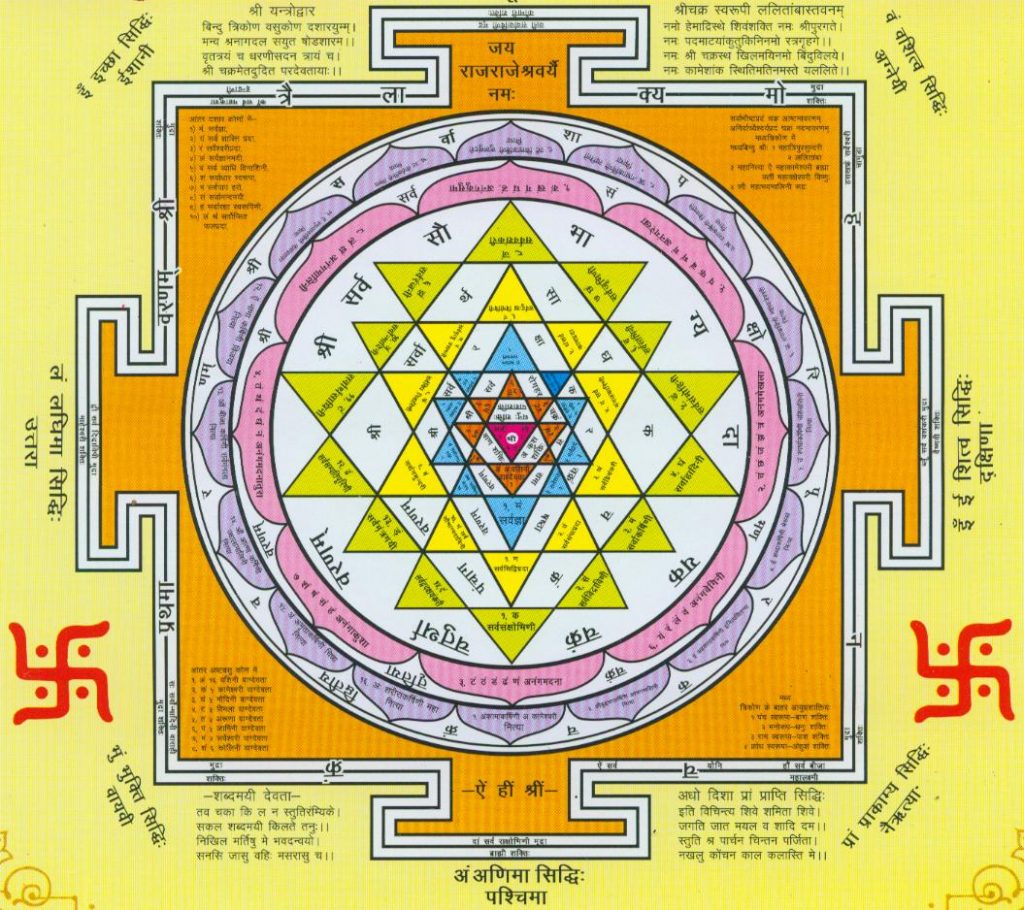 Dharmic cosmology is governed by bandhu interconnections among the astronomical, terrestrial, physiological, and spiritual realms; and each of these realms is itself connected, in the broadest sense, with the arts, healing systems, and culture. As discussed previously, bandhu describes a correspondence between the whole universe and the individual consciousness, which can be explored and developed from many alternative starting points. Thus, dharmic traditions have a common current that impels the individual along a natural quest to discover the reality beneath the appearances and to appreciate relationships among seemingly unrelated phenomena.

Dharmic traditions consider the common experience of reality as merely the transient reflection of a system in flux, interconnected with other realities across the past, present and future. In this flux, which affects all phenomena, repeating patterns may appear as static and independent ‘objects’, but this perception is just an illusory artifact of the limited mind. The individual person, of course, is himself a part of this flux. With the aid of meditation, he is able to witness reality as a detached observer—to see the personal ego, and indeed all fixed objects, as mere reflections of a moment in the flux.

Who is a Hindu?

Despite the fact that most Hindus lack the theoretical and historical background to articulate the symbolism of Indra’s Net, the awe-inspiring understanding of the reality it encodes has always been implicit in the average Hindu’s outlook. Given this outlook, most Hindus are bewildered when asked to define who they are. It seems like a silly question. They have grown up experiencing life as a rich diversity of ideas and practices passed down from their ancestors. So vast is their sense of openness that they feel no natural urge to draw boundaries between themselves and others. Indeed, many Hindus are surprised as to why someone would ask such a strange question.

Hinduism does not refer to a rigid entity with dogmas enforced by some centralized authority equivalent to the church. As Indra’s Net captures very poetically, Hinduism is a diverse, thriving ecosystem that has adapted and evolved over a long history. It exemplifies an age-old spirit of open inquiry and challenge. Indeed, such independent thinking has been a critical aspect of keeping it vibrant.

While the central authority of the church plays the role of reifying and guarding Christian identity, Hindus have historically relied on a living web of scholastic lineages to reflect their thoughts, debates, practices and experiences. Even though the colonial onslaught disrupted this ecosystem, Hinduism has continued to produce great thinkers who reinvigorate it with fresh ideas. The absence of a central authority that adjudicates the ‘one truth’ also makes it hard to explain what exactly Hinduism is. This flexible, hard to define quality is the ‘open architecture’ of Hinduism.