You are at:Home»Culture»Climate Change and Ancient Indian Town Planning

The advanced cities of 21st century contribute to nearly 80% of all the waste that is generated by different anthropogenic activities, and constitutes up to 60% of the total Greenhouse Gas Emissions which contribute to the phenomenon of global warming as well as climate change. We are repeatedly warned again and again that the sea-level is rising twice as fast as previously forecasted while threatening hundreds of millions of people across the globe. But the threat of sea-level rise to cities is only one piece of the puzzle, extreme weather patterns such as intense storms are another. These impacts of climate change are going to be felt strongly in the years to come.

As urbanization and globalization continue apace, cities will become the front line actors in the carbon emissions and climate change arenas. The future of hundreds of millions of people living in urban areas across the world is to be affected by varied impacts of rapid urbanization and climate change. Additionally, the climate refugees from the rural areas that have been hit by drought or flooding caused by the climate change will also aggravate the migration to cities, i.e., the process of urbanization. And the overall impact caused because of all these phenomena’s would vary depending on the form of settlement, its geographic considerations and the nature of the local economy.

However, it is noteworthy to mention that the cities and urban residents are not just victims of climate change but also part of the problem. And if cities are part of the problem, that means they must also be part of any solution. Thus even if it’s clearly understood that climate plays a major role in shaping up the settlement style, the final form of the settlement pattern can also drastically affect the climatic conditions of any area.

It would be worthwhile to note that the ancient systems of town planning in India had interesting insights that seem practical even today. Let us look into some of the designs they offered.

The principles and theories of town planning in ancient times are contained in various literatures, which can be broadly classified into two types for the purpose of analysis: whereas the first category contained proper Architectural Shilpa Works (like Mansara), the second category comprised of Non-Architectural Adjuncts (as expounded in Veda’s, Upveda’s/Sutra’s, Brahmana’s, Purana’s, Agama’s, Tantra’s etc.). The nature and growth of towns then were chiefly governed by site conditions. The towns were generally situated on river banks, a flowing stream was always preferred for sanitary requirements.

Mansara Shilpashastra deals with many aspects of town planning such as study of soil, climatic conditions, topography, fixing orientation to get maximum advantage of the sun and wind, and layout of various types of town plans such as Dandaka, Swastika, Padmaka, Nandyavarta, Prastara, Chaturmukha, Karmukha.

The main or king streets were aligned in the East-West to get the roads purified by the Sun’s rays; while the short roads were aligned North-South. The roads running round the village called ‘Mangal Vithi’ were reserved for priests. 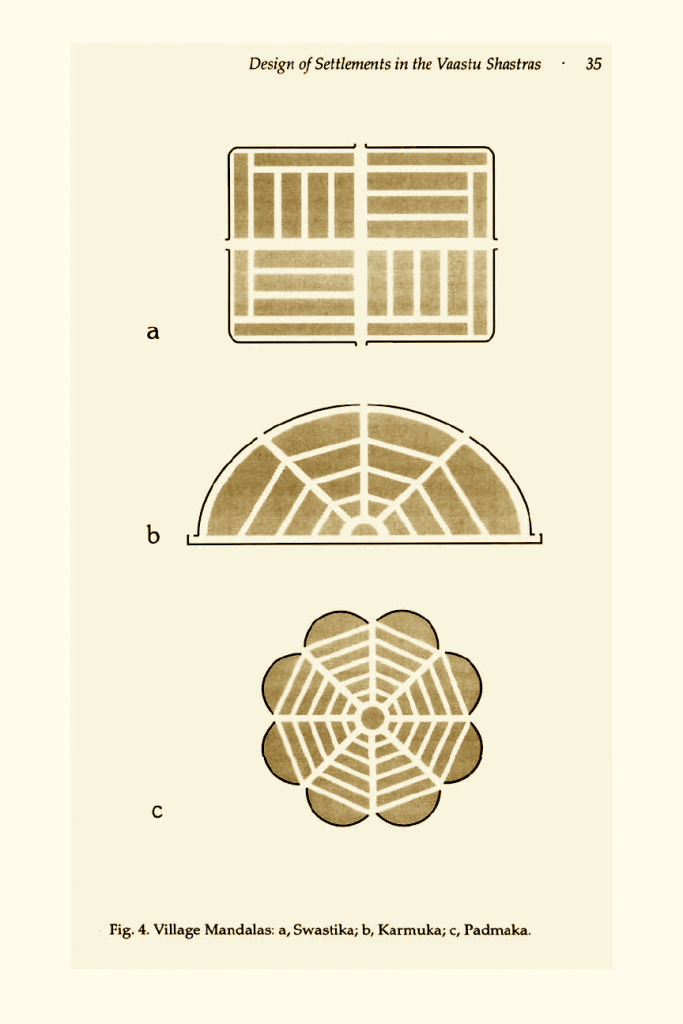 According to Mansara, the probable site for the proposed settlement was to be examined and its fitness was determined from its smell, colour, shape, direction, sound and touch. For example:

According to Mayashastra (another Vastu treatise),

Hence such sites were rejected.

As per Mayamata, the following rule was laid to determine the strength of soil. It says to dig a pit deep in the ground and again return earth into it. If the earth fills more than the pit, the ground is good. But if it falls short, then the ground is bad and so it is rejected.

Furthermore, following were some of the building bye-laws which were adopted in ancient India:

There were two bathing tanks in the Northeast and Southwest corners and temples out of which principle one was placed at the west end of king’s street called rajpath. Minor deities and their temples were on the outskirts of village. The fortified wall had four gateways facing the two main streets. In the given plan each of inside plates had two rows of houses.

The city was enclosed in walls and there were four gateways at cardinal points. For example, the city of Jaipur. 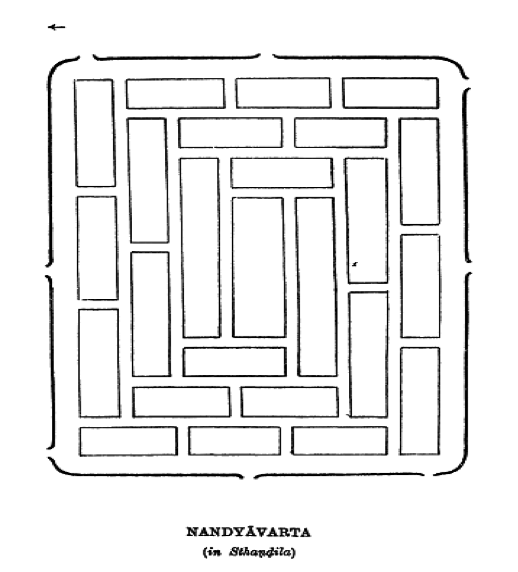 Vaishyas and Shudras resided at the Southern part. The temple of Chamunda Devi was erected at North- East side. The village was protected by a wall and ditch. The principle streets were purified by rays of Sun from morning to evening.

Planning, in general, can refer to the planned and optimal use of any and all resources. Nowadays, the planning, development and management of human settlements is becoming an increasingly important task. As a result of technological advancements and integration of societies and economies of the world, planning of cities and regions has become very complex. Professionally trained planners are therefore needed in order to evolve new options for the development and management of human settlements, which isn’t only limited to the metropolitan areas but also to small cities, towns and villages. And as settlement planning and management remains a fundamental property of intelligent behaviour, this obviously requires the study of history in order to omit the previously committed mistakes & to gradually learn from them.